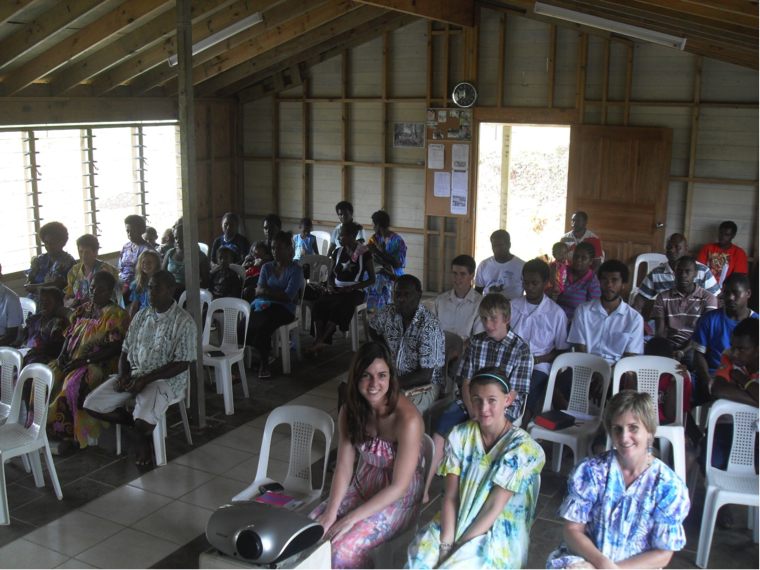 WHAT WE ARE DOING NOW:

At the moment, we don’t have a Missionary in Vanuatu.  Despite this, we remain very involved in the work of developing the Church there.

This is done by:

However, the biggest project that we are currently undertaking is the work of Bible translation.

Andrew Fox is employed (full-time) by the Church (in Australia) as a Bible Translator.

The New Testament in the Big Nambas (Malekula Island) language has already been translated, printed, and distributed, however this is currently being revised, by Luke & Marie Zylstra and Greg & Helen Fox.  This part of the project is nearing completion.

Andrew is working on the Old Testament.  At the time of writing, ten books have been translated – Genesis, Exodus, Joshua, Judges, Ruth, 1st & 2nd Samuel, Psalms, Proverbs, and Ecclesiastes.  Andrew hopes to also complete 1st & 2nd Kings, Ezra, Nehemiah, and Esther.  Then, the work needs to be checked for accuracy by a ni-Vanuatu person, as well as by an expatriate Consultant.  Once that process is complete, we hope to then print a revised New Testament, together with the 15 books of the Old Testament mentioned above.

Eventually, we hope to have the whole Bible translated, printed and distributed!

Another aspect of this work is the recording of the translated Scriptures on to audio files. The members of the Malekula congregation are currently doing this.  Once this is completed, the files will be transferred to solar-powered mp3 players, manufactured by Megavoice… These also will be distributed.  This process has already been completed, in the Lenakel (Tanna Island) language.  We also have a New Testament printed and distributed in that language, as well as in the Ifira (Efate) language!

There is much to be done, but we give thanks to God for the progress thus far!

A BRIEF HISTORY OF THE WORK IN VANUATU:

Our Church in Vanuatu is known as the Presbyterian Reformed Church of Vanuatu (PRCV).

The PRC mission work in Vanuatu was established in the early 1970’s, when two men (Greg Fox and Luke Zylstra), and their families were sent by the PRCA as Missionaries to North West Malekula. Their task was to learn the language, to preach the Word, to establish an indigenous church and to translate the Scriptures into the local language (Big Nambas). God has been very gracious in growing the church in Brenwei, North West Malekula – today there are more than 60 members, 4 local Elders and 3 Deacons, and their Pastor is Kenny Sep’et.

In 1983, the PRC commenced an outreach to the island of Tanna. The first Missionary, Kilet Itei came from the church in Malekula. Tragically, he died three years later, but Tom Kaut of Tanna continued the work of caring for the church. Several other men from Malekula have assisted Tom in his work over the years, and an Australian (PRC) Missionary (Tim Zylstra) and his family also lived and worked with him for nine years preaching God’s Word and translating the Bible into the local language. The congregation in Tanna has a stable membership and the translation work continues, with support from the returned Australian former Missionary who is fluent in the language.

The PRC has also had a long history in Port Vila. In the late 1970’s the church sought to establish a church on the Island of Ifira (off the coast of Port Vila) but Island politics prevented this; instead we were allowed to live, worship and translate on the island of Iririki, a short boat ride away from Ifira. A handful of Australian Missionaries were based on Iririki and sought to establish a church there, but with limited success. An encouragement was the completion of the Ifira New Testament, however, there was a limited response to the gospel from the Ifira people and in the mid 1990’s the work on Iririki ceased.

A new church plant in Port Vila was established in 2010, but this time on the Efate mainland, in the area of Freswota 5. This was at the request of the Vanuatu PRC, who saw a desperate need for a local church in the capital, whose population had ballooned due to urban drift and the lack of services, employment and schooling in the outer islands. This was, and continues to be a joint work between the PRCV and the PRCA. To date, two Australian Missionaries (Ken Zylstra and Andrew Fox) have lived and worked in Freswota 5 with their families alongside local Missionary-Elders from the Malekula church. The work is continuing, with people being brought to Christ through His Word.

The first Missionary family returned to Australia in 2013, and the second family has also returned (in 2017).  We have since sought the Lord regarding the future of the Freswota 5 congregation, in particular.  We have been praying that God would raise up either another local Elder, or provide another Missionary to go and continue the work there, alongside the ni-Vanuatu members and office-bearers.

We have been partnering with our sister Church in New Zealand, the Reformed Church of New Zealand (RCNZ), in an effort to further this cause.  We now wait upon our Lord to see what His answer will be.